“I live and work in Huntington Beach, California and this ongoing project will be my look at the city I live in and the mixture of the beach culture and suburban sprawl.” – Ed Templeton 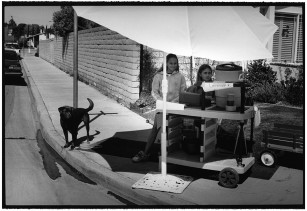 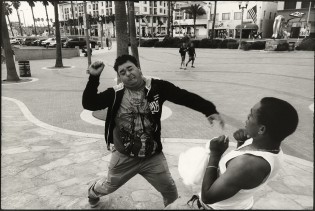 Ed Templeton was born in Orange County, a sprawling suburb of Los Angeles. He became interested in skateboarding when he was in junior high school and devoted all his time to it. Templeton’s interest in fine art began as a teen with shopping mall books about canonical painters such as Picasso, Dali, but it was his later discovery of Egon Schiele that would have a profound effect on him. Templeton eventually became a professional skateboarder, which allowed him opportunities to tour Europe. While there, he spent every free moment absorbing its galleries and art museums. Soon after, he realized his first exhibition, a skateboard art show in Chicago. Templeton is owner and creative director for his company, Toy Machine Bloodsucking Skateboard Company. He has also executed design work for Spin, as well as Grand Royal, Geffen and Factory Records. Templeton considers his painting and photography pursuits separate from his skateboarding and design work, which is more graphic based. He has exhibited his work worldwide including exhibitions at Alleged Gallery, New York, Roberts and Tilton, Los Angeles, Modern Art, London, and Aki-X Gallery, Tokyo. Solo museum exhibitions include Museum Het Domein, Netherlands (2000), and Palais de Tokyo, Paris (2002). Templeton currently lives and works in Huntington Beach, California. – Joshua Liner Gallery